The Costumes of "Gloriana" 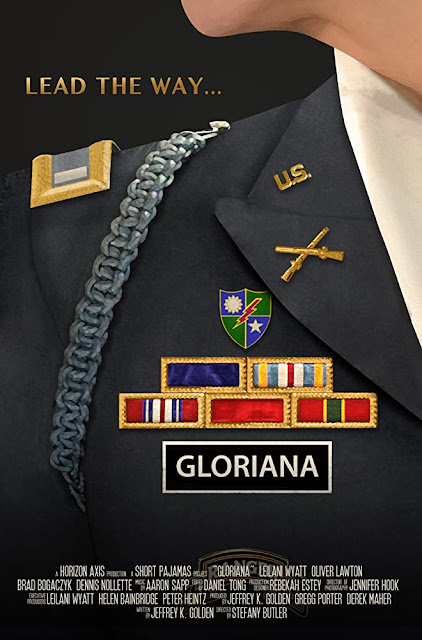 *I can't remember when I originally starting writing this thing, but it's been years.  I would fathom at least six.  Probably seven.  The post settings suggest this was going to be posted on March 25 of... some year or another.

Anyway... it's lost relevance since, but I wanted to post it just to get it out of the way.  Because it's true.

"Gloriana" tells the tale of the Army's first female platoon leader in the 75th Ranger Regiment (which is, as of this writing, a fiction).  Basically, her unit gets hammered in combat and she's held liable, charged with conduct unbecoming an officer and failure to obey order or regulation.

Anyway, don't want to give too much away.  You'll just have to go to the Short Pajamas YouTube page and watch it.

I have a confession to make: the uniforms in "Gloriana" are fucked up.  Of the seven characters that appear on-screen in uniform, four of them are incorrect.  That bothers me, greatly, and I want to explain how and why the errors occurred.

Servicemembers and veterans have long-wondered why Hollywood gets military uniforms wrong so insanely often.  Within the military itself, one of the explanations bandied about is that it's somehow illegal for actors to wear an accurate uniform, since that's technically impersonating an officer.  The reasoning behind this explanation is that as long as one thing is wrong, there's no impersonation.

It's been a while since I've read the actual law behind it, but the impersonation has to be with the intent to deceive.  Actors aren't trying to deceive anyone.  Sure, they're trying to convince their audience that they're military folk, but that's an entirely different concept as far as the law is concerned.

The truth is: Hollywood gets it wrong because they just don't know.  And in my case (I am an Army veteran), we got a long wrong because... well... let's get into that, shall we?

No costume fittings.  No medal/ribbon/insignia acquisition.  Nothing.  With eleven days to go.

Also, and I feel like I should mention this, I was producing two other short films that were both being shot the week prior to "Gloriana."  As far as paperwork and management goes, I was in Hell on Earth.

With ten days to go, we hire the costumer who will stick with the project, Aoife Baker.  Here, I'd like to offer a disclaimer: despite my complaints about uniform errors, Aoife was awesome.  A full 90% (or more) of the errors are not her fault.  Had she been our first costumer, we'd have been able to present more accurate uniforms.  But, thanks to "Courtenay," we were already up shit creek and our paddle was broken.

Aoife immediately set off to get uniform sizes from the two primary actors.  One of the other producers and I scrambled like Hell to find military veterans to fill the roles of the jury panel (five people), the prosecution (two people), and the defense (one person).  All of these people were to have their own dress uniforms.  We then purchased the appropriate Judge Advocate General (military lawyers) insignia for whomever showed up to be the lawyers.

Except... only three people confirmed when we contacted everyone the day prior.  I shit you not, two days prior, everyone was coming.  One day prior... three.  Welcome to independent filmmaking.  And these were paid gigs.

On set, we wound up dressing Aoife up in appropriate attire, dying her hair, and made our gaffer put on a suit.  They were now our prosecution team.  Yes.  We wound up with non-actors portraying civilian prosecutors in a military trial.  Luckily, we were able to edit them out of the finished film.

But even before filming, Aoife had scheduled the uniform fittings for the primary actors without me, despite my telling her that I should be there.  When she showed me the fittings for approval, I went apeshit.  There, our lead actress - playing an Army Ranger - was wearing a skirt.  Now, male or female, I'm of the opinion that every self-respecting Army Ranger wants to wear his/her jump boots.  And in order to wear jump boots, you have to be in pants.  So we had to scramble for some pants.  If you watch the film carefully, you'll see that Gloriana's pants don't quite fit properly.

There's a scene in the film with Military Policeman.  We got the MP unit patches correct.  But, for some strange reason, we couldn't find any MP Brassards to go on the uniform!  So, our MPs are not clearly identified as MPs.  Which sucks.

*And that's all I wrote.  I suppose all I wanted to say with this piece is that, yes, I know the uniforms in "Gloriana" are inaccurate, but those inaccuracies weren't necessarily our (the filmmakers') fault.

So there you have it.