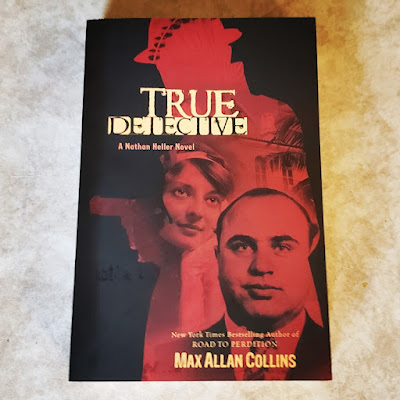 "Max Allan Collins is always a strange read for me. He spins pretty good yarns (and is responsible for the story behind my favorite movie), his attempts to fit his characters into history are admirable, and he clearly has a talent for visual storytelling (films and comics, particularly).

But, man, his prose can be a slog to read. Bad and mostly indistinguishable dialog. Boring and superficial description. And a strange predilection for comma-crazy grammatical forays into near nonsense. Strangely enough, there is a two-chapter run (12-13) that is an absolute narrative delight. Dunno what he tapped into there, but I wish he did it more often.

All that said, TRUE DETECTIVE is a pretty good yarn and I've little doubt his Nathan Heller series would make for good television. But while I have two more of his books on my shelf still to read, I don't think I'll be getting to them anytime soon."

I'll also add that, over his career, Collins' style seems to have stayed remarkably consistent, to the extent that the same things I both praised and criticized him for in Road to Perdition, Road to Purgatory, and Road to Paradise remain the things that I both praise and criticize him for in True Detective.