Book Irreview: The Player of Games 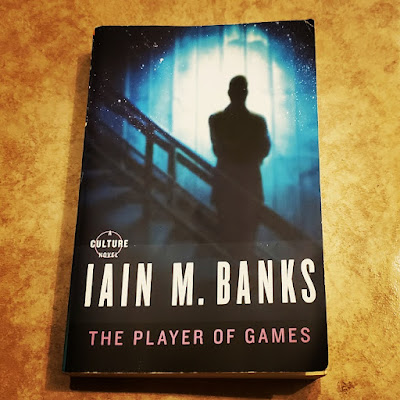 My buddy Doug lent me the first two books in Iain M. Banks' Culture Series over two years ago.  I read the first book, Consider Phlebas, shortly after, and didn't like it all that much.  I can't recall all the details (very few, in fact), but do recall being insanely overwhelmed by the plot and the scope of the world building (galaxy building, really).  Sure, I kinda-sorta remember the really cool battle in the underground train station and the abandoned weapons facility... although now that I type that, there's a strong possibility that I made those details up.

Anyway... I didn't care for Consider Phlebas.  Instead of giving Doug back his copy of The Player of Games, it collected dust on my bookshelf for almost two more years.

Anyway... I finally got around to reading The Player of Games and, well, I really like it.  It's a much simpler story and - despite taking place in the insanely large world/galaxy of Banks' imagination - the world/galaxy building is kept to a still-effective minimum.  I'm still not a fan of the Banks' naming conventions (they are a right-fucking-mouthful), but the narrative of a citizen of the Culture playing a game for the fate of an alien empire is absurdly compelling.  By the end of the book, I was breezing through its pages, impatient to read what happens next.

I think, on the strength of this one, I'll keep on with the Culture Series.  Not sure when I'll get to book 3 (I have to borrow that one from Doug, too), but I'm pretty sure I will.  And this time, it won't be out of guilt for having kept a book so long... it'll be because I want to.