Book Irreview: The Fall of Yugoslavia 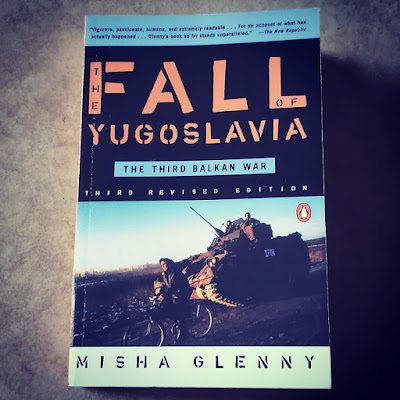 One of my university history professors recommended Misha Glenny to me back when I first started doing a deep-dive into the history of the Balkans.  I wound up acquiring Glenny's The Balkans and actually started reading it when... something got in the way.  Can't recall, exactly, but I apparently attempted to read The Balkans in September of 2019 (thanks, phone notes!).

Whatever the case, I didn't read it.  Fast-forward to now and I do set The Balkans aside to read after having finished Fancies and Goodnights.

Except... something makes me read The Fall of Yugoslavia, instead.  Maybe because Glenny wrote it before he wrote The Balkans, but... I dunno.

The Fall of Yugoslavia is an intense book, written as a record of (then) current events.  Glenny's love for the Balkans and its peoples is made clear in his writings, and even though the book is liberally peppered with Glenny's personal opinions of the goings-on, the fact-based reported remains remarkably objective.

Stealing from my Instagram review (a bad habit I've developed lately, I know): "I learned an embarrassing amount of new things regarding a conflict I felt reasonably educated about."

Indeed, my contemporary knowledge of the current (2021) state of Bosnia has been greatly increased and improved by this book.

And while I very much appreciate the appendix that defines local terms and acronyms, I would have very much appreciated another which provided bios for the major players of the conflicts.  I found myself getting many of the locals confused with one another and - despite my great interest in the subject - still found myself mistaking identities by the end of the book.

Also, an inordinately high number of typos from a publisher such as Penguin.  Like... noticeably high.

That stated, I can't wait to read The Balkans, which I will hopefully begin this coming weekend.